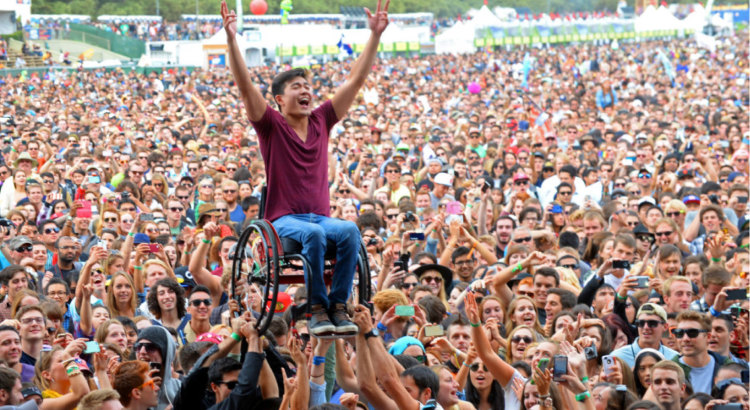 Last week, I attended a Skype meeting of my team for the Knowbility competition.   I spoke with members of my team (team Axis) and my adviser Joseph O’Connor about where we were in terms of development of my website, what had been done recently and did it work for me, and questions that I needed to bring up with the judges at the Pit Rally at Knowbility the next evening.

I found the meeting very empowering and supportive.   I learned from all of the members of my team about the kinds of things they were thinking as they were developing the website.  I learned about how a screen reader (accessibility tool for a person who is blind or cannot read the screen without assistance from a machine) would read the site and what coding needed to happen for a screen reader to read my request for left sided navigation.  I learned about font size and color contrast and the concerns that needed to be addressed there.  And I learned about how they saw my site which helped me understand more about my own thinking about my site and what’s not articulated in the text or architecture.  And I learned that I needed to know a lot more about what scientists knew about neuroplasticity before I could articulate it, and that even though I know what it is through my experience of it in my getting better since my injury that I don’t yet know how to talk about it very well, even though the increases in my neural pathways must underlie the increased functioning that allows me to be talking through skype with my team and addressing my teams questions and following my team and adviser to the extent that I am following them.   (And following them as much as I did made me appreciate how much I wasn’t understanding what they were talking about nearly as well in the last two calls!)

All kinds of information came together for me and I understood so much more about the concerns that they were already addressing to make my website more accessible.  I also had new learning about the state of the research (or lack of research) on design elements to address cognitive accessibility issues on websites.   And I began to understand just how much thought and effort my team and adviser had been doing already and were continuing to do to make my website as accessible as possible to people with cognitive disabilities.  I felt so supported and I felt so blown away by the work that had been done and I learned from everyone.  I felt like my head was about to explode (in a good way) with new ideas and connections.   I literally felt that I could feel my neural pathways strengthening and branching out and connecting and growing.   I do not know how correlated my experience of what my head felt like with what was actually happening to my neural pathways.  Hopefully someone more knowledgeable than I can tell me about that correlation that happens between brain change and learning and whether some aware people can indeed feel it or not.

Maybe I am just willing my brain to grow and the visualization that I am doing by willing and imagining it, promotes the growth.

Or perhaps since I know that my neural pathways have grown and developed in the past, I know to believe in brain growth.  Perhaps it will happen because it has happened before.  Perhaps, there is not a correlation to what I am feeling in my brain and my pathways growing.   This would be an interesting question to know the answer to!

I would like to say more about all the concrete reasons that I felt empowered, during that call.

But that will have to wait today because I need to limit my time on the computer and I have other things that have to get done today.

I do remember having an experience before my brain injury where I thought I could literally feel the pathways of my brain growing after new learning, when they finally started to develop (which seemed to take longer than I expected they should take).

So I will share my memory of that experience with you to see if you can recall a similar time when you knew you were learning something new in a way you hadn’t know it before.

I took calculus (or was it linear algebra?) in the summer time at the University of Texas to prepare for graduate school in economics.

Since it was summertime, the course moved quickly and we had three tests in a short period of time, maybe six weeks, maybe eight.

I found nothing intuitive about the math I was trying to learn.   In addition, the graduate student leading my section was very bright but his explanations of the work were not helpful to my own learning.  So I had to study really long hours and really intensively.

I remember feeling after the taking the second exam, that I finally was understanding the concepts that I had been tested on in the first exam.

And I felt that I could feel the pathways grow from the new learning (although I would have said it was just my brain growing at that time).   I could look back at the first test and understand all these problems that I had answered more by rote than anything else.   And now I could connect them and understand them!  Suddenly, I knew the material and could begin to apply it!

That is a description of what the experience felt like before my brain injury, and its how I felt after my meeting last week with my team and adviser.  Except last week the experience was even bigger.   During our call, I began to understand what my team was thinking about it a much more expanded way and how supportive it was of my own mission with my website.

How did I feel after our team meeting?

Here’s the visual that I want to leave you with.

When I watched the live streaming of the annual Accessibility, this Fall, I was impressed by a picture that one of the presenters showed about what accessibility is.

It was a picture of a woman in a chair (wheelchair) being held up off high off the ground and supported by a group of people (who did not need to use a chair to help them stand).   It was a very empowering photo of possibility when everyone works together to support someone who is differently abled.  (Please see bottom note now that picture has been added to this post.)

I looked at that picture and thought, I want to feel that kind of support around the computer and my cognitive deficits that limit my abilities.

After working with my team last Wednesday, I felt (and feel) what I imagine the woman in the chair felt.

During our team call, I felt lifted up.

During our team call, I felt supported (even more than I had already felt).

And honestly, I felt that together, the sky is the limit!

Accessibility is so, so, empowering.

I came across my notes from the Accessibility Conference and found that Elle Waters had shown this picture and that it came from the Huffington Post originally.   Elle Waters sent it to me so that I could use it on my blog.

Two things I want to share that I realized when I re-read my notes and saw the picture.   I had remembered the person being lifted up as a woman, like me.   Looking at the picture, I believe he is a male.  I liked that in my memory, the person could be anyone or any gender.

And, I wrote down in my notes something important that Elle Waters had said when she showed the picture and is worth repeating.   I will paraphrase her from my notes here.   She said that true accessibility is about the crowd experience of lifting someone else up.   Its not about the isolation and frustration that the person without accessibility experiences–frustration or difficulty with new learning, or lack of access.   Its about everyone feeling lifted up by the access.

And that is what I feel and I believe that the rest of my team has felt as we have improved my website and learned and made the site more accessible.  We have all felt lifted up.

And we have all lifted each other up.